When JESUS had received the sour wine, he said, "It is finished," and he bowed his head and gave up his spirit.

I pray to properly articulate the joy of the LORD that is in my spirit.  I pray you can receive this word today and be encouraged knowing that victory is already yours.

To some this verse may bring sadness as they read that our Savior was given sour wine and HE said "It is finished."  Yet may I suggest you began to see your glass half full instead of just half empty. 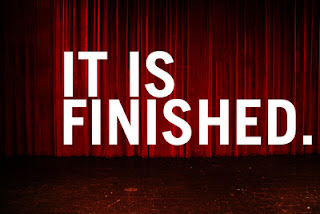 You see our LORD hung on a cross after being beaten severely.  It was undeserving.  It was shameful and HE desired at some point before HE was raised up that this cup pass from HIM.  Yet, HE submitted to the will of the FATHER.

I want to tell you something you may have missed, but I pray you never forget after this day and it is that JESUS knew the outcome.  I want you to know that HE said "It is finished."  Not man and not the enemy.  HE bowed HIS head and gave up HIS spirit.

You see like JESUS we today stand in a place of victory.  Already knowing the outcome, because our Heavenly FATHER has already given us a word.  HE has made us promises and because HE made them we must rest in knowing that the outcome is just what HE has said it would be.

The one point that just may excite me the most is that HE gave up HIS spirit.  You see no devil in hell could take it from HIM.  Just like no devil in hell can take away the spirit of GOD that lives in us.  Nothing can by any means harm us!