I set my rainbow in the clouds, and it shall be a sign of a covenant between Me and the earth.


I was always fascinated by the story of Noah and the Ark in the Bible.  I wasn't excited about all the animals he brought into the Ark.  Yet, it was the rainbow that always seemed to fascinate me.  You see I could relate to a rainbow.  I had seen one with my own eyes.  To know that GOD made HIS promise with it seemed some what mystical as a child.

As I've grown as a woman many other things fascinate me about this story.  One being how just one man was found worthy.  How this one man didn't even question GOD's word, he just believed HIM and moved according to his faith in GOD.

As life continued to be as it is, I realized that Noah did it all in the face of opposition.  You see what he was doing had never been done before.  So, at some point in my life, I realized that the ridicule and condemnation I was receiving for doing radical things was most likely nothing compared to what Noah faced in his time.  Building a ship of that magnitude and declaring rain was coming?  Yeah, I can relate in the spirit as I keep building this boat GOD has instructed me to build.  Although "they" have had their share of laughs.  My soul knows that "HE; the Almighty GOD!" Is a keeper of HIS promises.

Each time my faith in HIS promise is attacked, it never fails that when I least expect it, HE gives me a friendly reminder; a sign  that HE is still a promise keeper.  So yesterday, as I returned to work from an appointment.  Right after being attacked in my spirit about this one particular promise.  One I never asked for, but believed HIM for it the moment HE told me it was mine.  I stepped out of my car
to find this: 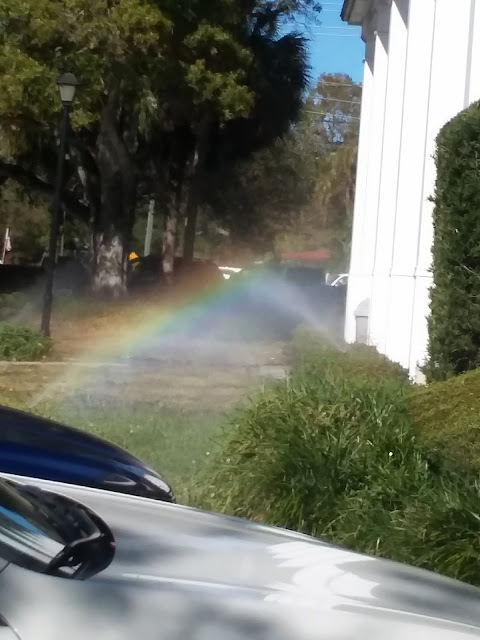 Yep, you see it!  A rainbow right there in the middle of the sprinkler sprays.

I know some skeptic is saying it's just the angle at which the light is hitting the water and because it's a certain type of water and on and on. Well, you still can't deny it's still a rainbow.  Only my GOD can place a rainbow right there in the middle of the sprinklers.  I walked from side to side and it remained.

As I entered the building I still saw it, there in the water between the sprinklers.  I felt the LORD encouraging me to stay focused on what HE has called me to do, because HE will keep HIS promise to me.

I believe HE allowed that rainbow to be so close to me. I felt as though HE was saying I'm bringing your promise right here where you are and you are much closer to it than you think.  I was then reminded of the double rainbow HE placed in the sky about a month ago.  Two days in a row He put HIS rainbow in the sky.  The second day there was a double rainbow.  I praised HIM the more that day than I did the day before.  I remember thinking, LORD, I'm not being ungrateful, but I sure wish I could see one up close.  Maybe one day I imagined.  Today was that day!  And sooner than later, today will be the day that I see HIS promise fulfilled in my life.

HE allowed me to be close to the rainbow; close to HIS promise.  I'm sharing this with you to remind you that you too are closer to your promise than you think.  I honestly believe that we are already standing in our breakthrough and that 2018 is going to be a year full of promises being fulfilled in the earth!!

May this day and the rest of your lives be full of many wonderful blessings in JESUS name!