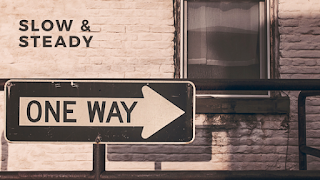 Again I saw that under the sun the race is not to the swift, nor the battle to the strong, nor bread to the wise, nor riches to the intelligent, nor favor to those with knowledge, but time and chance happen to them all.

Slow and steady.  That's what the LORD gave me and then as HE does, HE showed me.  So let me start from the beginning.

From the first day of 2018 until now (31 days) the LORD has been opening doors in my life.  One after the other, after the other.  With each one, I've prayed and waited for an answer.  HE has been faithful to give me a plan and a vision for each one.  So I have now written down the plans HE spoke and then it seemed as though HE was telling me to sit down, be still and rest.  Of course I was beginning to play over and over again in my mind, all of the steps I'll need to take to make every last one of these things happen and to do them all in excellence.  HE spoke again.  Be Still, Rest and then came the words slow and steady.

I've been faithfully going to the gym with my son.  I have been on the treadmill.  Each visit I build up my speed, increase my incline levels.  I am even running throughout a portion of my workout.  The half a mile I was barely speed-walking has now increased to a mile and a half with a goal of two miles.  All in the same 30 minutes I've always done on the treadmill.  The last two visits, I get on and as I begin to set my program up on the machine, I hear GOD say, slow and steady.

The first night was last week.  I noticed that although I did not run at all during my workout that I still burned quite a bit of calories and I was really close to the same distance as when I ran during my speed walk cycles.  Last night, I get on the treadmill and again,....slow and steady.  So I get started, and I was led to elevate to level 4. I've never increased to level 4 in incline mode.  Yet, I did it.  Then after a few minutes I was led to increase the height of my climb to level 5 and to speed up my pace.  Not a lot, but to pick it up and remain steady at that pace.  Before I knew it, my work out was over.  I looked at my report on the screen and I had gone further and burned 30% more calories at this steady pace on a different plain than I usually do.

What does any of this have to do with you? Well, I'm glad you asked.  You see, so many of us are so busy spending time on the lowest level, running, pressing and fighting to just survive when GOD is calling us higher.  Yet, we run from the height of the hill.  We assume it has to hurt more, cost us more.  We're certain it will wear us out.  Yet, the truth is that things are different on the higher level.  As you climb to the higher level and remain at a steady pace (diligent), you're covering more ground, the fight isn't nearly as hard and the payoff is so much greater than you can imagine.  So go ahead, have faith.  Allow GOD to stretch you to that next level.  You'll be pleased with what you find there.  You'll discover that you've had what it takes in you all along, for our GOD put iit there before the beginning of time.