The Position of Grace 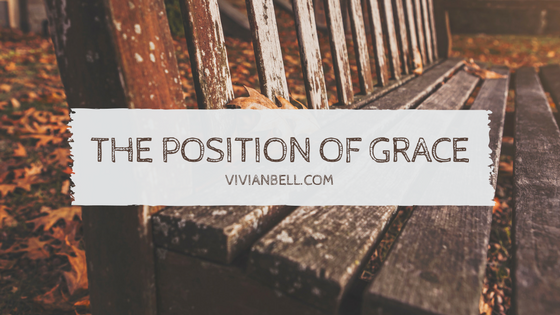 Matthew 26:14-16 ESV
Then one of the twelve, whose name was Judas Iscariot, went to the chief priests and said, "What will you give me if I deliver him over to you?" And they paid him thirty pieces of silver.  And from that moment he sought an opportunity to betray HIM.

Growing up, I've heard numerous opinions as to why Judas Iscariot hung himself.  From those who believe that the guilt overtook him, to those who dared to say that it was the will of GOD.  I've even heard others say that he deserved it!  I wondered for years what explanation was true.  It confounded me  as a child.  Yet, the more GOD showed me HIS love, the more my outlook on this and life as a whole has changed.  Then this morning the LORD spoke these words to me..."The position of Grace" then it all began to make more sense.

You see, when Adam and Eve sinned our position in the earth changed.  We went from being in a position of total dominion, to being in a state of sin, which separated us from GOD spiritually.   So when JESUS came and died for us, HE came to not only pay for sin and to remove its power from over us, but HE also restored us back to HIMself.  HE restored us back to our position of dominion and power in the earth.  The issue that Judas had, was that he could not accept this new position of grace.

The LORD showed me that Judas' sins were no greater than any one of ours.  For in the sight of GOD, sin is sin.  There is no big sin or a better sin.  It is all just sin.  Yet, when HE looks at us, all HE sees is HIS blood.  All HE sees is HIS righteousness.  Judas was deceived as many of us are today.  He was fooled into believing that his sin was beyond grace.  Judas believed that there was no way that JESUS could forgive him for what he had done.  Yet, just like Judas betraying JESUS was no secret to HIM (for JESUS foretold of it), neither were any of our sins a secret to HIM.  HE knew of every last one of them thousands of years ago, and HE went to the cross for every last one of them.
GOD loves us so much, HE was not going to allow anything to stand between us and HIM.  HE gave us HIS righteousness in exchange for our sins.  Then HE demolished the power of sin, death, hell and anything else that could set itself against us!

Today, I pray that you will let go of all guilt and shame. That you will lay it at the feet of JESUS and allow HIM to be your LORD and SAVIOR.  I pray that you will accept your position of Grace that HE has bestowed upon you.  This gift is priceless and it requires no payment from you.  JESUS paid for this position a long time ago.  I bind up any spirit that is set to hold you in bondage.  I rebuke the lies of the enemy that has told you that GOD does not love you or that you've done too much bad.  I rebuke every lying spirit and every spirit of bondage in JESUS name.  I speak peace over your life.  I declare truth is revealed this day in JESUS name!