HE Has Gone Before You 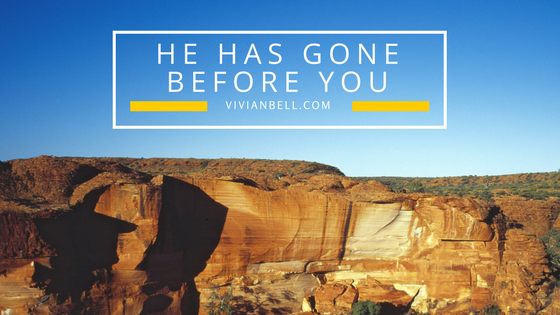 2-So the woman arose and did according to the word of the man of GOD.  She went with her household and sojourned in the land of the Philistines seven years.  5-6 And while he was telling the king how Elisha had restored the dead to life behold the woman whose son he had restored to life appealed to the king for her house and her land.  And Gehazi said, "My lord, O king, here is the woman, and here is her son whom Elisha restored to life.  And when the king asked the woman, she told him.  So the king appointed an official for her, saying, "Restore all that was hers, together with all the produce of the fields from the day that she left the land until now."

In this story, the woman made a move based on the word of GOD as HIS servant had spoken to her.  She left the land where she was to a place that would sustain her and her household until the drought was over.  When she returned she went to appeal to the king for her land and possessions.  Yet, when she arrived she was already being spoken about.

At some point GOD has given us all instructions and by faith we've stepped out and walked in obedience.  Yet, at the end of it all, it "appears" that everything we had and everything we've worked for is gone and now we will have to appeal or fight to get it back.  Yet, I am here today to tell someone that GOD has already gone before you.  Someone, somewhere, who shouldn't even know your name, knows just who you are and is waiting to bless you.

Just as the king appointed to her an official and gave him instructions to restore all that was hers and everything that was produced from her fields from the time she left until now.  The word of the LORD for you is that GOD has also appointed HIS angels over you.  That everything that it appears you have lost is coming back with interest, from the day of your obedience until now.  Don't be dismayed because it seems as though you've been out here on faith for a long time.  There is an appointed time that all of the toiling and loss will cease.  Even in this situation, GOD had already set an appointed time for the famine to end.  Seven years.  Seven representing completeness.  Stay encouraged, hold on and don't you dare give up.  For the LORD our GOD has already gone before you and you will have all that GOD has promised unto you.