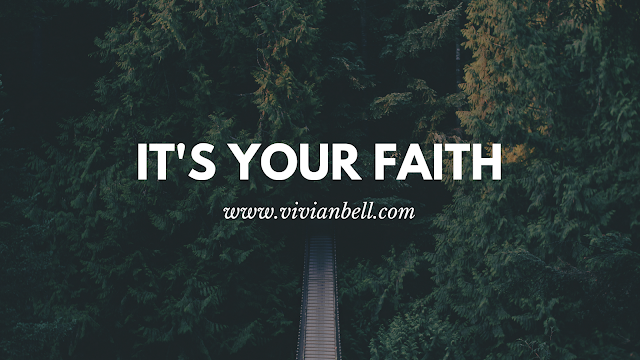 Hebrews 11:6 ESV
And without faith it is impossible to please HIM, for whoever would draw near to GOD must believe that HE exists and that HE rewards those who seek HIM.

As I lay awake in bed this morning I just wanted to bask in the peace of GOD.  I just wanted to lay in HIS presence.  I could  not bring myself to say a lot.  I actually asked HIM to quiet my spirit and to speak to me.  I made a decision to lay right there and just listen.  I wouldn't move until HE spoke.  GOD knows our thoughts and our desires.  HE knew the question that my heart needed answers to, and HE gave it to me in three words: It's Your Faith.

The word tells us that without faith it is impossible to please GOD.  So what would be the best place for an attack?  Yep, you guessed it your faith.  For the enemy it is not about the "thing" it appears he's after.  See, that's part of the distraction; the trick.  We get so focused on the thing that appears to be the test, and we begin to focus on protecting that thing.  Missing all along that the thing the enemy really wants to take is your faith to believe GOD and to take HIM at HIS word.  For if we can take an invisible GOD at HIS word, we'll continue to seek HIM and HE'll continue to reward us.  As HE continues to reward us, we'll continue to believe HIM yet the more.  Which will lead to more seeking of HIM, finding HIM and being rewarded by HIM and on and on the cycle goes.  The only thing that remains for the enemy to do, is to attack the thing that we're focused on in hopes to shake our faith.  If he can get a foot in, he'll do it, and then he'll question your identity in CHRIST.  he'll send whatever he can to distract you.  he'll kill, steal and destroy.  The only question remains is will you still hold on to your faith when he is finished?

The enemy's strategy is  no different than it was in the day of Job.  The enemy reached out his hands and touched everything he could, from Job's children and all his possessions, to the love of his life telling him to curse GOD and die.  There is one thing that has also not changed.  The enemy can do only so much and when the test has ended and you've held fast to your faith.  The reward will be greater than anything you could have ever imagined.