Why Did You Stop? 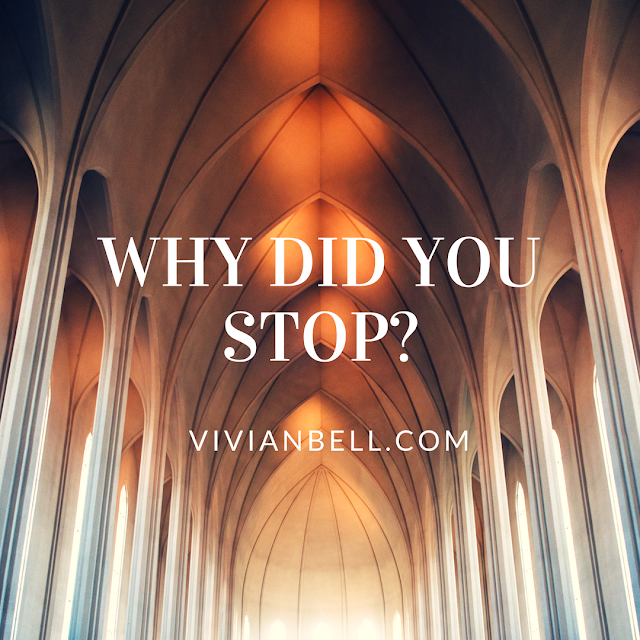 The word of GOD tells us to keep on asking.  So why do we stop?  Why do we after some time decide that we will take our dreams, tuck them in our back pockets and accept life as it is?

Beware of distractions in this season.  For they lead to discouragement.  For at first we are distracted, (usually right after the LORD gives us a word or a promise).  Then soon follows discouragement due to the fact that we "allowed" ourselves to become distracted.  This thought itself is a trick of the enemy.  For if it was just that we lacked the strength to sustain the vision, the LORD would have never given us the vision and the enemy would never have to send his cunning distractions in the first place.  So a distraction should not end in self-condemnation (again a tool of the enemy) it should end in us being aware that we/our vision/hope/future is under attack and that we need to be more vigilant.

Should we not stop this train at the distraction or the feeling of discouragement, it will soon lead to procrastination and stagnation.  None of which move us forward.  It ultimately ends in us lacking the courage to ask again for the thing we know that GOD has promised to give us.  Then we're back to dreams tucked in our back pockets and us meandering through this life.  Yet, this is neither acceptable nor is it the will of GOD for our lives.

As we keep asking our faith grows.  That dream is sparked again and we start working.  We get out of bed at 3 a.m. when we are awakened and we pray, write, whatever we're called to do, we do it!  Don't stop asking, seeking or knocking.  I have decided that in this season of my life I am going to get everything that belongs to me!  I want all my stuff back!!! (in my Kalyx Bulgrin voice).  I want everything stolen from me, everything I gave up on and left.  I want all the stuff my ancestors should have gotten, but they stopped short of.  I want everything and I do mean everything!  Not because I am greedy, but because I serve a big GOD who has made me big promises and I have faith big enough to believe that if I ask, according to HIS word HE will deliver!!!!  So in JESUS name, I'm asking, believing and receiving!!!