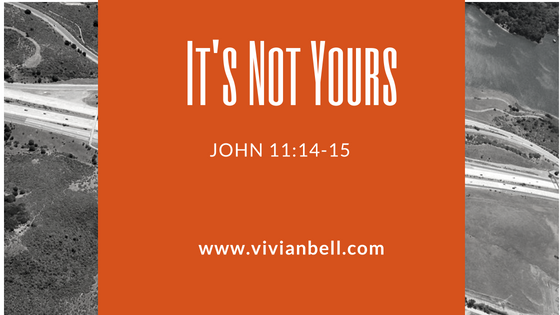 Then Jesus told them plainly, "Lazarus has died, and for your sake I am glad that I was not there, so that you may believe.  But let us go to him."

Lazarus died and was placed in a tomb for others to believe.  Sounds crazy right?  But have you ever considered that the thing GOD promised you, that appears to have died, may just be taking place so that others around you may believe that GOD is real?

I know you're thinking could we not have skipped all of this?  Could the LORD have not just spoken to that person and they believed?  For some, it takes more than that.  For some it's going to take your continued praise to GOD while they watch the thing HE promised you be buried.  Perhaps your undying faith is what will encourage someone around you to say to GOD, "Show yourself to me!".  So often in the midst of what feels like the worst trial in our lives, we wonder LORD, what have I done.  Or perhaps you have asked the LORD Why didn't you come before now?  Perhaps you too will say, LORD, I sent for you...I told you (like Mary and Martha) that this situation was bad, yet you lingered and now it is dead!

But I've come to tell you today, that if GOD gave you a word HE's going to keep it!  If HE told you this will be the outcome, you better believe, that will be the outcome.  Don't become discouraged because it appears to not be working (because it's not going the way you envisioned).  Just hold on, before you know it, JESUS will be calling that thing forward and just like Lazarus, it will get out of the grave and live again!