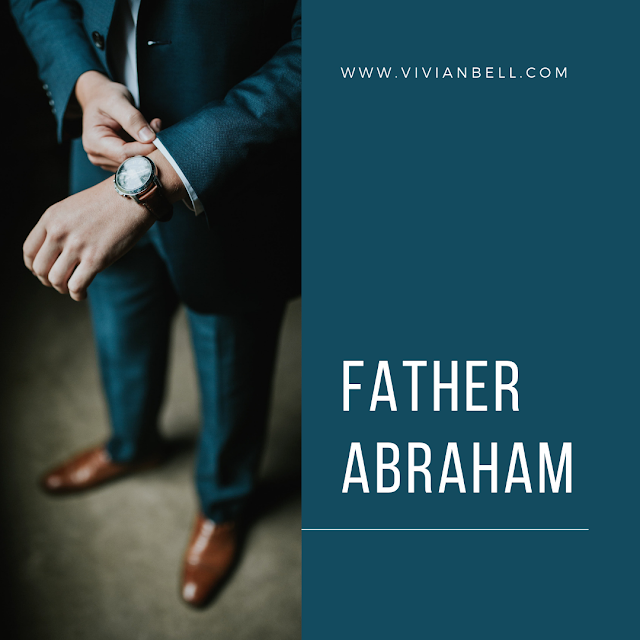 Genesis 3:6-9 NIV
So also Abraham "believed GOD, and it was credited to him as righteousness."  Understand, then, that those who have faith are children of Abraham.  Scripture foresaw that GOD would justify the Gentiles by faith, and announced the gospel in advance to Abraham: "All nations will be blessed through you."  So those who rely on faith are blessed along with Abraham, the man of faith.

My spirit has been like this Holy Ghost jukebox for weeks now.  I told my son a few weeks ago, that it's as if GOD has turned my insides into this jukebox and every time HE wants to say something; HE deposits HIS "coin", (so to speak) into my jukebox and HE picks a song.  The song that HE played several times recently; was the old song we sang in VBS (Father Abraham).  Father Abraham, had many sons.  How many sons has father Abraham... I am one of them and so are you....So let's praise the LORD right arm....

Yeah, I know you're singing along with me right now.  Well, initially I thought it was just a reminder of my childhood.  Then HE reminded me of how I always enjoyed that song.  How I felt like my soul was on fire.  Even years later when I would teach in VBS, that song always got me going.

Then today, as I sit in the midst of something that should have been so scary and devastating, my jukebox came on again to this song.  Then the LORD spoke.  It's your heritage; The promises of Abraham are yours.  Many may not believe it, but to those who will have the faith to claim it; they'll receive every blessing and every promise.

From the beginning of this day, when the news seemed to get worst and worst my soul just became more and more excited.  I'm not saying these words because it makes for a good blog post.  I am telling you that the more I choose to believe the word of GOD, the more excited I get when I see trouble coming.  I know you may have just thought; she's a little crazy.  You're right.  I am crazy about the GOD who loves me enough to shed HIS blood to redeem me. I'm crazy enough to have seen miracles performed over and over again and to wake up every morning expecting them.  I'm crazy enough to believe that every last promise that GOD made to me, that I'm going to see it.  I'm crazy enough to believe that the word of GOD is sure.  I am crazy enough to believe for you also, until you can believe it for yourself.  I am praying for you that you will claim your heritage today.  That your mindset would shift and that you will lay hold to everything GOD put your name on before the beginning of time.