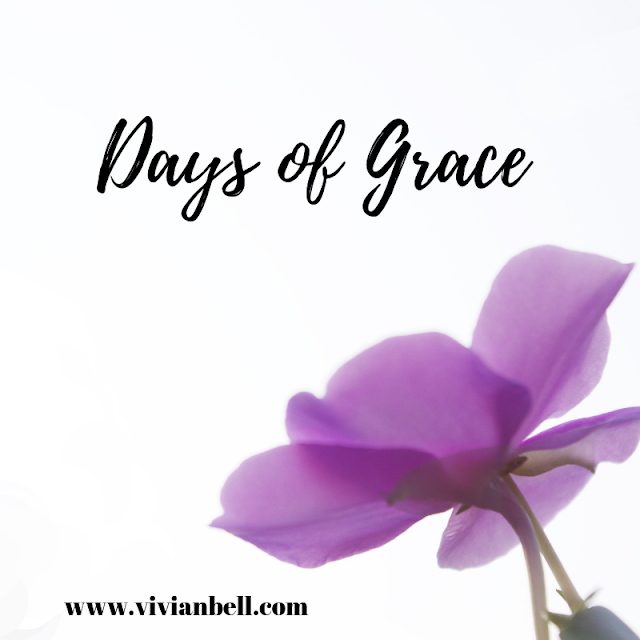 1 Corinthians 15:10 ESV
But by the grace of God I am what I am, and his grace towards me was not in vain.  On the contrary, I worked harder than any of them, though it was not I, but the grace of God that is with me.

"Days of Grace" is the title of my first devotional.  It's the title of this blog that you read daily.  But it's more than that.  It's more than just some title that I came up with.  It's a title God gave to me.  You see when I began to write again over 15 years ago, I was in this place where the enemy was really doing a number on me with condemnation. It was a daily battle on the battle field of my mind.  I had made a mistake and the enemy was out to convince me that this time was it. That it was over for me.  That what I had feared my whole life would happen; that my mercy and grace from God had run out. That I had finally blown it so bad, that any good thing God had for me, was now lost.  The enemy tortured me with this lie almost daily.

Yet, it was in that time, that God showed Himself so mightily in my life.  I found myself before God begging Him to forgive me and fighting against the lie that said He could not.  Daily I begged Him until the Lord spoke to me and through His scriptures He reminded me of who I am.  He continued to lead me daily to His scriptures bringing to my remembrance that who I am in Him is not about who I am in my own abilities, but it is about the gift of grace that He has given to me.  He reminded me that everyday was full of His mercy and grace and that I did not have to beg for nor earn it. It was a gift; an inheritance I have as a daughter of God.

This blog and this series of books all started with a hope that you too would know, understand and accept this gift that God has so graciously bestowed upon us.  Today, forge ahead in spite of  yesterday, or even 10 minutes ago.  Move boldly in this day knowing that you are forgiven and that his grace is more than sufficient for you.