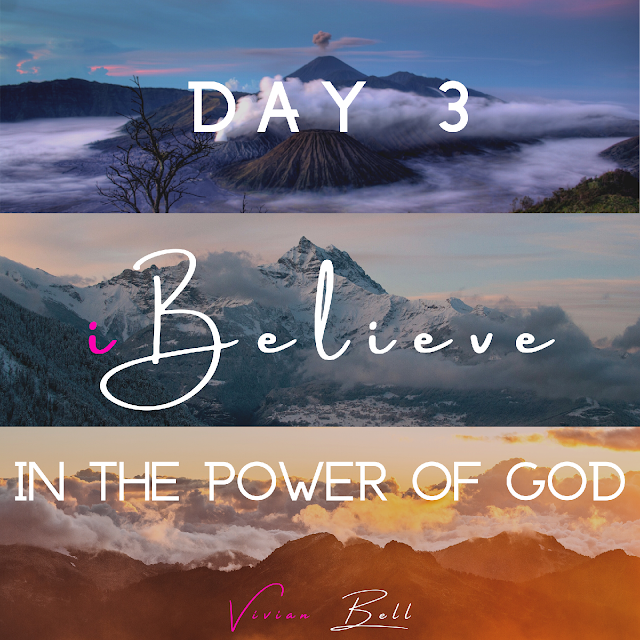 Day 3 - iBelieve in the Power of God
I King's 18:37-38 NKJV
Hear me, O Lord, hear me, that this people may know that You are The Lord God, and that you have turned their hearts back to you again.  Then the fire of the Lord fell and consumed the burnt sacrifice, and the wood and the stones and the dust and it licked up the water that was in the trench.
The situation created by Elijah in this scripture left lighting the alter an impossibility for man.  Which is the perfect place to see the power of God step in and change a situation.  You may feel as though you are in an impossible situation during this time in life.  However, the God we serve is still the same God who after the sacrifice, alter and the land around it had been drenched with water numerous times, sent a fire down from Heaven that not only lit the sacrifice, but it consumed it, the alter of wood, the stones and dust while also drying up all of the water that had ran down into the trenches surrounding the alter.  What a mighty God we serve!
Dare to believe that the God of Elijah is our Almighty God!  He is mighty and strong in battle.  The defeater of all things opposing His children.  He is the same God who raised the dead and healed blind eyes.  His power still exists today.  Only believe!  Have faith.  There is nothing too hard for our God!
#iBelieve #iBelieveGod #iBelieveTheWordOfGod #iBelieveInThePowerOfGod #iBelieveChallenge #iBelieve10DayChallenge #ShiftTheAtmosphereWithYourFaith  #GodisGreater
Email Post