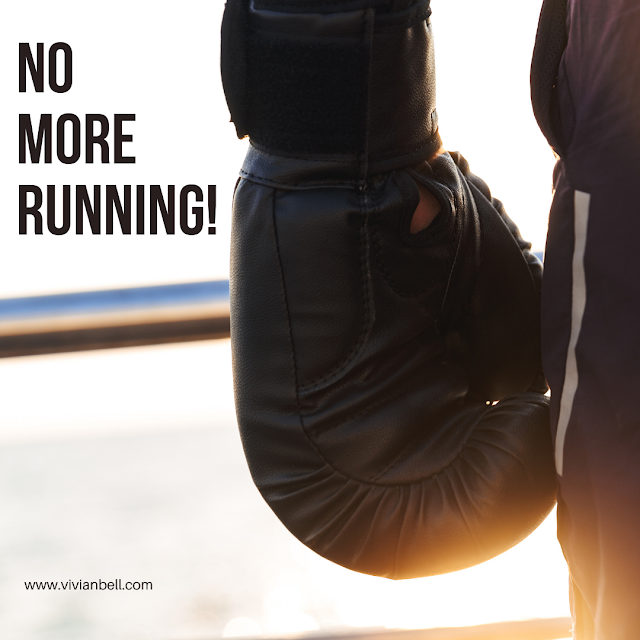 For the weapons of our warfare are not of flesh, but divinely powerful for the destruction of fortresses.  We are destroying arguments and all arrogance raised against the knowledge of God, and we are taking every thought captive to the obedience of Christ, and we are ready to punish all disobedience, whenever your obedience is complete.

I was reminded of a time in middle school when my sister would beat me up every day.  At first, I wasn't sure what triggered this daily beat down.  When I realized what caused it, I did everything I could to avoid it. But the beat downs continued.  Every day I took it; I cried, and I prayed.  Well, one day I got bold enough to tell our father.  He called her in and asked her if what I had told him was true.  Her reply was, "Yes, and I am going to beat her again when you leave for telling you."  I braced myself for her punishment (I hated for my siblings to get in trouble, but I had readied myself for this one and I wasn't going to cry for her this time.)  But to my surprise, my dad dismissed her.  I am sure you can imagine my disbelief.  "Dad...uhm... Sir???"

My father could see the confusion on my face, I am sure.  Then his words hit me even harder..."If you come home crying tomorrow, I'm going to whoop your behind."  I was devastated.  I could not believe it.  Why wouldn't my dad defend me?  I was in the right?  I didn't even fight her back I told him.  My father repeated himself and walked out of the room.  As I am sure you guessed, tomorrow came.  I had avoided her all day at school, ducking and dodging.  But the walk home came and we "had to" walk home together.

As she came towards me to hit me, I reached all the way back, spun around on the ball of my foot and slapped her with all my might.  When I realized what I had done, and I saw the look on her face.  I ran all the way home, locked myself in the bathroom for two hours.  To my surprise, she did not tell our father and she also did not beat me up at school again.  I am not sharing this story because I want to paint my sister in a bad light.  I love my sisters.  But I am sharing this story, because I need you... yes, you.  The one who is angry because God has not come to get you out of your situation, I need you to put your gloves on.  Some things are not going to stop until we fight back.  So, no more running.  No more taking blows from the enemy of your soul.  He does not fight fair, and he never will.  Yet, the weapons you have as a child of God are mightier; they are stronger.  You are spending your energy being mad at your Heavenly Father, when He has given you His armor and weapons that will destroy everything thrown at you.

I realized later in life, that my father had not abandoned me.  He knew that it was time for me to stop running and to stand up for myself.  Had I not been taught that lesson that day, I would have remained the girl who was not only pushed around by her sister, but by others as well.  I would most likely be getting pushed around by the enemy also.  Aren't you tired of running?  Your fight is fixed. As a child of God, you are on the winning team.  So, get your gloves on.  Put your mouth guard in and let's get this "W".  Let's win over depression, anxiety, frustration, fear.  Let's stand on the word of God and fight back for our families, marriages and even our co-worker that seems to live to give us a hard time.  It is time to flip this thing; it is time for the running to end!